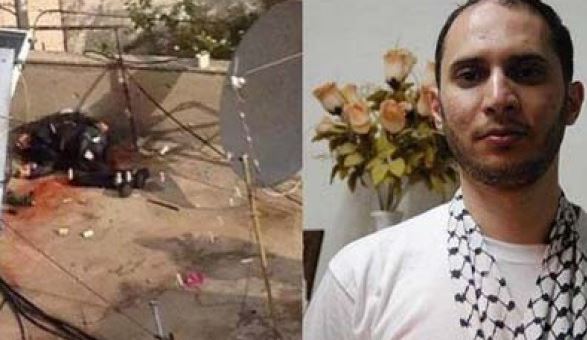 Hundreds of Palestinians, including family members, held earlier on Friday at dawn the funeral procession of the slain Palestinian, Ibrahim Hijazi, 32, in occupied Jerusalem although the police and the army imposed a tight siege in an attempt to limit the number of Palestinians attending the funeral.The Israeli army handed the family the body of their slain son, shortly after midnight, before installing numerous roadblocks to prevent the Palestinians from participating in the funeral procession, and informed the family that only 45 persons are allowed to attend.

The WAFA News Agency said the soldiers installed many roadblocks in Salah Ed-Deen Street and various nearby areas after declaring them closed military zones, while hundreds of Palestinians, who were prevented from participating in the funeral procession, started chanting for the slain Palestinian, the liberation of Palestine and the end of the illegitimate Israeli occupation.

Despite the extensive presence of soldiers and police officers, and the tight siege, more than 300 Palestinians managed to break through the barricades, and attended the funeral and burial of the slain Palestinian.

Hijazi was buried in Bab as-Sahera graveyard in Salah Ed-Deen area in occupied East Jerusalem. He was assassinated, Thursday, in his own home by multiple rounds of live ammunition fired by undercover forces of the Israeli military.

Israel claims he is behind the attempted killing of fanatic Israeli rabbi Yehuda Glick, who suffered four gunshot injuries to his chest, ribs and intestines.

Glick led repeated invasions into the al-Aqsa Mosque in occupied Jerusalem as part the attempts “to demolish the mosque and rebuild the temple.”

He is also the head of the so-called Temple Mount Heritage Foundation, the umbrella foundation that runs many fanatic groups responsible for numerous provocative attacks and invasions targeting the Al-Aqsa Mosque and Muslim worshipers.

Hijazi is a former political prisoner who was held by Israel for 11 years, including 10 years in solitary confinement, and was released on June 5, 2012.

He was initially sentenced to six years, but in 2004, he received an additional four-year imprisonment allegedly after attacking a soldier.