In Memory of the Balfour Declaration: An Ongoing Palestinian Catastrophe 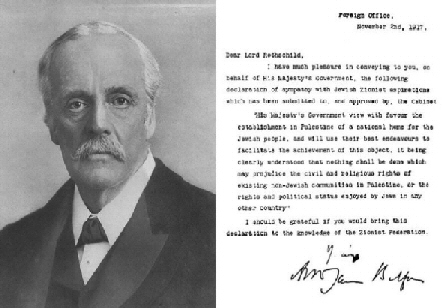 97 years ago today, 2 November 1917, Arthur James Balfour, the British Foreign Secretary of the time, wrote to the American Lord Rothschild, promising British support for the Zionist programme of establishing a ‘national home for the Jewish people’ in Palestine. This pledge of support was made without consulting the indigenous Christian, Muslim and Jewish inhabitants of Palestine, the Palestinian people. And it was made before British troops had even conquered the land.

Balfour declared his support for the establishment of a Jewish homeland in Palestine, and British imperialism in Palestine began.

Balfour illegally, and with no right whatsoever, promised Palestine to the Jews, to prevent the Jewish emigration to Britain.

Ironically, in the British Cabinet, Lord Montagu, the only Jewish member opposed the declaration.

———–IMEMC notes that the United States officially entered World War One in 1917, with Congress declaring war against Germany on April 6th. Narrowly re-elected in 1916, and riding the slogan ‘He Kept Us Out of War’, Woodrow Wilson’s second presidiential term was dominated by these events.

For more on this, see: Woodrow Wilson and the Balfour Declaration.

By May of 1946, President Harry Truman had announced his approval of a recommendation to admit 100,000 displaced persons into Palestine and, in October, publicly declared his support for the creation of a Zionist Jewish state.

Throughout 1947, the UN Special Commission on Palestine examined the Palestinian question and recommended the partition of Palestine into a Jewish and an Arab state.

On November 29, 1947, the United Nations adopted Resolution 81 (also known as the Partition Resolution) that would divide Great Britain’s former Palestinian mandate into Jewish and Arab states, in May of 1948, when the British Mandate was scheduled to end.

Under this resolution, the area of religious significance surrounding Jerusalem would remain a corpus separatum under international control administered by the United Nations.

On May 14, 1948, David Ben-Gurion, head of the Jewish Agency, proclaimed the establishment of the State of Israel. President Truman recognized the new nation on the very same day.

The day of the Israeli establishment coincides with the Palestinian Nakba (Catastrophe), when 700,000 Palestinians were forced to flee their homes and seek refuge from the Israeli military in foreign countries.

Since the establishment of ‘Israel’, and the beginning of the Israeli occupation, about 7 million Palestinians have been documented as refugees by UNRWA, making them the largest refugee group in the entire world.

Some 2 million Palestinians have been killed since 1936 —

0.1 million from violence, 1.9 million from war-, expulsion- and occupation-derived deprivation; 7 million refugees; 4.1 million Occupied Palestinians deprived of ALL the human rights listed by the Universal Declaration of Human Rights ; 6 million Palestinians forbidden to even live in the homeland continuously inhabited by their forbears to the very dawn of agrarian civilization; 0.9 million Palestinian children confined without charge or trial to what the Catholic Church and many others have described as ‘Israel’s Gaza Concentration Camp’ for the asserted ‘crime’ of being indigenous Palestinians living in a tiny, remorselessly Zionist-bombed patch of Palestine.

A ‘Jewish state’ under the pretext of religious sympathy, stole the Palestinian lands, and still do so today, each single moment.

See 11/02/13 Balfour, Promise Of Bloodshed And Massacres by Saed Bannoura, for further info.