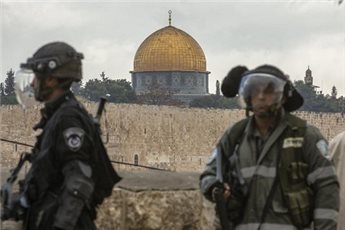 Politically far-right member of the Israeli Knesset Moshe Feglin entered al-Aqsa Mosque compound in occupied East Jerusalem, on Sunday, while entry was restricted for Palestinians, according to witnesses. Border crossings in Gaza have been closed indefinitely.AFP reports that, in renewed clashes with Israeli police on Saturday night, around East Jerusalem, police said 17 Palestinian protesters were detained, raising to 111 the number of arrests during protests since October 22.

An AFP photographer said that MK Feiglin visited the compound in the Old City district on Sunday, in spite of calls for restraint from Israeli Prime Minister Benjamin Netanyahu.

Mr. Feiglin is a leading advocate for increased Jewish access to the compound, which is home to the mosque, though such access, so far, has been obtained primarily by aggressive surprise visits to the mosque, backed by armed escort.

Men and women under 40 have been banned from entering the mosque since, dawn prayer at around 4:30 a.m., witnesses told Ma’an News Agency. Additionally, several employees of the Ministry of Endowment who work inside the compound, as well as students there, were also reportedly denied entry by Israeli police officers.

Police, however, told AFP that no restrictions were in place.

Palestinian MK Ahmad Tibi says that Israeli PM Netanyahu’s request to try and calm the tension in the Old City is unacceptable.

He accused the Netanyahu government of being behind the ongoing escalation in the holy city.

While speaking to Ma’an, Tibi added that “the statement Netanyahu’s office released is unacceptable as I don’t agree to be viewed as an instigator if I go to the al-Aqsa Mosque.

“It is natural that I show (myself) in al-Aqsa, while the presence of extremist Jews there is provocative and instigative.”

Tibi described Netanyahu as “a thief who tries to help find stolen things which he himself stole.”

“The problem lies in the ruling party and the Likud lawmakers and their supporters. They are the ones who stir up the situation by storming al-Aqsa Mosque. They are the main cause of what is going on in addition to Netanyahu’s decision to shut down the al-Aqsa Mosque to Muslims.”

Al-Aqsa and adjacent neighborhoods have seen several months of violence, now, with the mosque compound serving as a rallying point right-wing Jewish attempts to take control of it and, in response, Palestinian resistance against these attempts.

Israel, on Thursday ordered a rare closure of the compound, after police clashed with local youth following the fatal shooting of Muataz Hijazi, a Palestinian suspected of trying to murder American-born extremist rabbi Yehuda Glick.

The area reopened the following day, with hundreds of additional police deployed by Israel, who continued with their ongoing policy of prohibiting entry for Muslim men under 50.

Director of the crossing Munir Ghalban said on Saturday evening that ‘the Israeli occupation inform us of his sudden decision to close the crossings without giving any reasons, and did not specify the duration of the closure’.

According to Al Ray, the official of the Political Bureau of the Islamic Resistance Movement (Hamas), Moussa Abu Marzouq, said on Sunday morning that the Israeli entity violates the ceasefire understandings by closing the crossings.

He described it as ‘boyish behavior and irresponsible, and their justification is rejected.’
Marzouq pointed out that the closure is a collective punishment imposed on Gaza strip, which violates all international laws and conventions’.

Israeli Channel 2 said that the decision to close the crossings came in response to rocket fire from the Gaza Strip.

Blockaded by Israel –- by air, land and sea –- since 2007, the Gaza Strip is associated with seven border crossings linking the region to the outside world.

Six of these crossings are controlled by Israel, while the seventh, Rafah, is controlled by Egypt authorities who keep it tightly sealed for the most part.

Israel sealed four of its commercial crossings with Gaza, in June of 2007, after Hamas wrested control of the strip, following elections.

Al Ray further reports that, currently, Israeli authorities allow the Kerem Shalom crossing – which links Gaza to both Israel and Egypt – to operate for commercial purposes. The Gaza-to-Israel ‘Erez’ crossing, however, is generally devoted to the movement of individuals between Gaza and the occupied West Bank.

A truce deal recently brokered by Egypt, between Israeli and Palestinian groups in Gaza, calls for reopening the strip’s border crossings, which, if implemented, would effectively end the seven-year blockade of the territory.