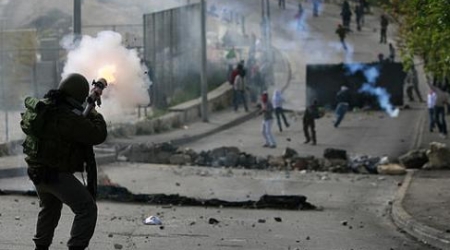 On Sunday, a Palestinian was shot and injured with live ammunition, while many others were injured with rubber-coated steel bullets fired by Israeli forces, during confrontations which erupted at Qalandia checkpoint, to the north of Jerusalem.According to WAFA correspondence, confrontations erupted during a peaceful demonstration organized by popular committees for the defense of al-Aqsa mosque, in light of recently escalating Israeli violations against the mosque.

Local sources stated that a 19-year-old Palestinian was shot in the thigh with live ammunition, while some15 others were shot and injured by rubber-coated bullets. Dozens others suffocated due to tear gas inhalation.

No arrests were reported by WAFA.

In the occupied West Bank, the Palestinian Authority sent extra security forces to Hebron, in the southern West Bank, on Saturday, just days after it announced that it would be conducting an extensive campaign in the city to arrest ‘outlaws.’

An anonymous Palestinian security source, speaking to Ma’an News Agency, said that the campaign targeted perpetrators of armed robberies, arms and drug trade, shooting, and those who sold Palestinian property and land to Israelis.

‘The security arrangements in Hebron are special because large parts of the city — especially the south — are still under Israeli security control, and Palestinian security forces are not allowed to operate there,’ the source said.

Some 40 Palestinians were arrested in Hebron in October alone, by Palestinian security forces, he added.

Meanwhile, the Palestinian Prisoner’s Club (PPC) has declared that medical negligence by the Israeli prison administration could cause prisoner Jaber A’wies, detained in Megiddo Israeli prison, to lose sight in his right eye due to severe infections left untreated.

WAFA further reports that, the head of the PPC Rae’d A’amer said, via press release, that A’wies cannot see well with his right eye due to an old injury he sustained from a bullet fired at him by Israeli forces before his March arrest, stressing that A’wies will lose complete vision in his eye if he doesn’t not receive the necessary treatment.

The prisoner’s family has appealed to the relevant parties to intervene and exert pressure on Israeli prison administration to provide their son with the needed treatment, stressing that they are banned from visiting their son for ‘security reasons’.

Minister of Prisoners’ Affairs, Issa Qaraqe, says that the number of sick prisoners detained in Israeli jails has now reached 1,500, of whom 80 are suffering from serious health problems and do not receive the necessary treatment; they suffer from malignant diseases, paralysis, and disabilities, in addition to cases of mental illnesses and neurological disorders.