At Least 19 Palestinians Kidnapped In Jerusalem 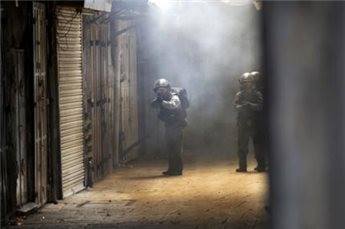 The Israeli army alleged the kidnapped are involved in recent clashes with the soldiers in the occupied city.

The Palestinian Detainees Committee in Jerusalem said the soldiers stormed dozens of homes and terrorized the families while violently searching and ransacking their homes.

Soldiers also invaded Ras Khamis area, near the Shu’fat refugee camp in the center of Jerusalem, and kidnapped several Palestinians; one of them has been identified as Amin al-Joulani.

The army disconnected power lines providing the invaded Palestinian communities with electricity before invading them, and conducted the home invasions, and abductions.

Also on Sunday, soldiers kidnapped a Palestinian woman, identified as Hanadi al-Hilwani, as she was leaving the al-Aqsa Mosque, and decided to keep resident Abdul-Rahman Sharif under interrogation. Sharif is a guard of the al-Aqsa Mosque.

It is worth mentioning that the army kidnapped more than 630 Palestinians in occupied Jerusalem in four months, and filed charges against nearly 30% of them, while many have been released and confined under house arrest.

Jerusalem has been witnessing daily clashes between the soldiers and Palestinian youths, especially amidst ongoing and escalating invasions carried out by Israeli extremists into the yards of the al-Aqsa Mosque.

In Jenin, several military vehicles invaded the al-Jalama nearby town, on Monday at dawn, and kidnapped a Palestinian woman identified as Yasmeen Abdul-Rahman Sha’ban, 31. Sha’ban is a mother of four children.

In addition, several military vehicles invaded Khirbet at-Tawil village, south of the northern West Bank city of Nablus, and demolished three homes, built by the Palestinians more than a 100 years ago.

Ghassan Daghlas, a Palestinian official in charge of Israeli settlements file in the northern part of the West Bank, said the army previously demolished several old homes in the same area as part of Israel’s efforts to expand its illegal Jewish-only settlements.