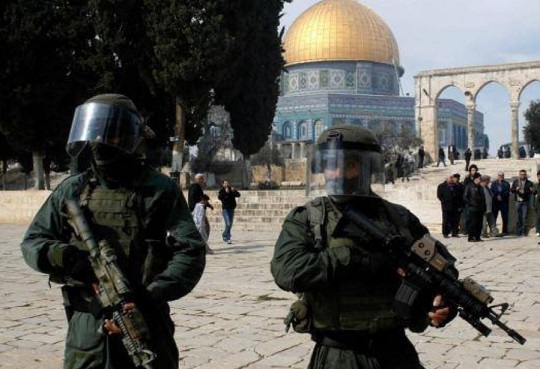 Undercover soldiers of the Israeli military kidnapped, on Monday morning, a Palestinian woman in the yards of the al-Aqsa mosque in occupied Jerusalem, when she tried to stop and an extremist member of Knesset (MK) from invading the yards of the mosque accompanied by her armed guards and Israeli soldiers.Eyewitnesses said the woman, Sahar Natasha, started chanting and shouting Allahu Akbar (God is greater) to express her rejection to the invasion and desecration of the mosque, and tried to stop the Israeli MK, Shuli Mualem-Rafaeli, of the “Jewish Home” Party.

An-Natsha was one of many women who tried to stop Shuli and her guards, who were advancing towards the Dome of the Rock, after invading its yards.

Israeli soldiers also imposed further restrictions on the entry of Palestinian worshipers into the Al-Aqsa Mosque and the Dome of the Rock, and closed all gates before allowing the Israeli MK and her guards into the area.

Eyewitnesses said employees of the Waqf and Islamic Endowment Department, in addition to Sheikh Omar al-Kiswani, the head of the al-Aqsa Mosque, tried to help the woman who was being beaten and arrested, but the army assaulted them, and forced them away.

The kidnapped woman was moved to a police station in the occupied city for interrogation.

The eyewitnesses added that dozens of soldiers and Israeli extremists invaded the yards of the al-Aqsa Mosque through the al-Magharba Gate, while dozens of soldiers were also deployed at the main gates of the mosque before preventing all men below the age of 40 from entering.

They said scores of Palestinians have also been prevented from entering the mosque for dawn prayers, Monday, while the army withheld the ID cards of all older men who were allowed through.

In addition, the soldiers conducted searches in the yards of the al-Aqsa mosque, and interrogated several worshipers.