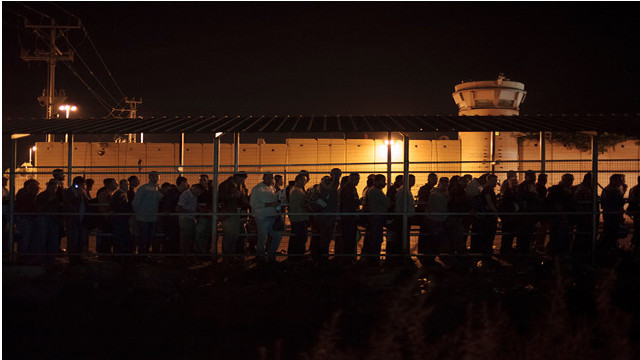 As the lines blur between official Israeli state policy and the politics of individual extremists, Israel will have a hard time maintaining its shroud of “democracy,” particularly in the United States.

The “only democracy in the Middle East” is slated to implement segregated buses for Palestinians and Jewish settlers traveling between the West Bank and Israel starting next month, in a move painfully reminiscent of the U.S. Jim Crow laws of the 1950s and that many Palestinians have deemed racist.

Israeli Defense Minister Moshe Ya’alon issued instructions last week to the army’s civil administration to ban Palestinian workers from state-funded Israeli-run buses, which they use to get to work in Israel from their homes in the West Bank. The ban would go into effect in early December, and would require thousands of Palestinians to leave and enter Israel through the single Eyal checkpoint near Qalqilya, away from major settlements. From there workers would take other buses to their homes.

Currently Palestinian workers must enter Israel through Eyal but they are able to return home through any checkpoint. Both entering and leaving Israel they are forced to undergo security checks which can take hours, and to swipe a biometric I.D. card before continuing to their workplace.

The decision came after years of pressure from Israeli settlers in the West Bank, who have complained of security threats and sexual harassment of Jewish women by Palestinian men, as well as lack of adequate room on the buses due to the presence of Palestinians.

Last November a public hearing in support of segregation was held by MK Moti Yogev (Jewish Home), deputy chairman for the Knesset Committee for affairs in Judea and Samaria (what Israel calls the West Bank), in which the committee heard testimonies from Jewish riders who complained of “verbal abuse, sexual harassment, overcrowding and outright violence against Jewish passengers by Arab riders.”

A rally was also held this year on September 7, organized by the Samaria Settlers Committee, in protest of the army granting permission for Palestinian laborers to travel on public buses to and from central Israel. The flyer for the protest depicted integrated buses as suicide bombs waiting to happen and asked, “Would you be willing to allow your daughter on this bus?”

“Riding these buses is unreasonable,” said Yogev, after riding on one such mixed bus. “They are full of Arabs.”