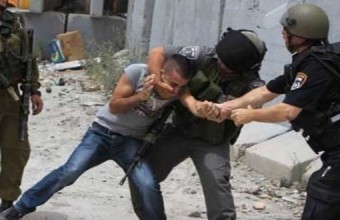 Israeli forces are reported to have kidnapped, at dawn on Tuesday, six Palestinian citizens during a large-scale raid campaign throughout the occupied West Bank.According to Palestinian media, local sources said that forces arrested a university student after violently storming and searching his home in Deir Sammit town, to the south of al-Khalil (Hebron).

His family members were reportedly left outdoors in rainy weather, during the search.

During the campaign, Israeli troops stormed a number of homes as they allegedly looked for a wanted person. One high school student received a summons for interrogation during a raid on his parents’ home.

Dozens of citizens were also reportedly detained and interrogated during the night at Dothan and Barta’a military checkpoints, to the southwest of Jenin, while their vehicles were searched.

Israeli forces also intensified their presence in Yabud town, where they carried out a search operation in the olive fields.

In related news, the Palestinian Prisoners’ Society has reported that forces detained, last October, around 100 Palestinians from al-Khalil, 45 of whom have been kept in administrative detention.