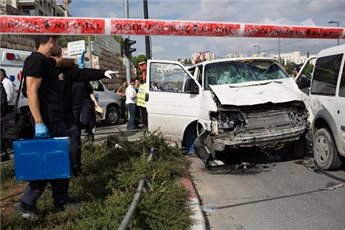 Hamas has claimed responsibility for a Jerusalem car attack which killed one Israeli border policeman and injured 14 others, earlier in the day. An unidentified group of assailants kidnapped a 16-year-old Palestinian boy, on Tuesday.In a statement, Hamas decalred that, through the attack, Ibrahim al-Akkari took ‘revenge for his people,’ for al-Aqsa mosque, and for Jerusalem.

According to Ma’an, the military wing of Hamas, the Izz al-Din al-Qassam Brigades, said on Wednesday, meanwhile, following the attack that al-Aqsa is the detonator which will ’cause a volcano to erupt in Israel’s face’.

Spokesman for the Brigades, Abu Ubaida, hailed the ‘heroes of Jerusalem and Hamas fighters’ who defend al-Aqsa Mosque with their souls and blood.

East Jerusalem has been under Israeli occupation since 1967 and, in recent months, Israeli authorities have frequently limited access to mosque compound.

The Israeli border police — the target of Wednesday’s car attack — are the security arm of the national police, and frequently work with the army in occupied Palestinian territory, to include the occupied West Bank and East Jerusalem.

An Israeli court, on Wednesday, ruled that the body of Mr. al-Akkari will be released to his family for burial, later this evening.

The court has limited the number of mourners to 35.

In related news, Ma’an reports that unidentified assailants have kidnapped a 16-year-old Palestinian, identified as Amir Majdi Ramadan, from Beit Hanina, while he was heading to his school on a motorcycle, Tuesday.

The boy’s father said that, according to what his son told him and reported to police, while he was on his motorcycle going to school, Tuesday morning, he was hit by a car from behind, upon which three unidentified assailants beat him over his head with a gun and placed him in the trunk of the car.

Mr. Ramadan added that he did not know of the incident until he received a call from Amir’s school telling him that his son had not arrived for studies.

He attempted to call his son several times before receiving a call from a friend telling him that Amir had been found lying in a neighborhood in Beit Hanina, and that a local took him to the main street and called an ambulance.

He said that the Israeli police arrived to the area and found a jacket covering the boy that is thought to belong to one of the kidnappers. A booklet in Hebrew was also found in the jacket’s pocket.

Amir’s motorcycle was found in a garbage container by police. His school bag was nowhere to be seen, however.

He was taken to Hadassa Ein Karem Hospital, with bleeding in his lungs and bruises on his back and neck.

Amir said that he could not recognize any of the kidnappers, saying none of them spoke a word to him.