MPs of the France’s Governing Party Call for Palestinian Recognition 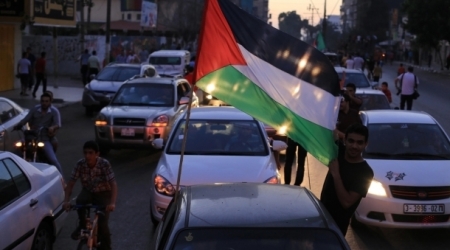 The ruling party in France has called on French authorities to officially recognize the Palestinian statehood, that they might reach a final settlement over the current conflict with Israel, parliamentary sources said.Sources added that the party is also working on a draft resolution which reflects this and calls for a vote, during the few next weeks.

From the non-final draft that was reviewed by Agence France-Presse (AFP):

‘The National Assembly calls the French government to make the recognition of Palestinian state as a tool to reach a final settlement for the conflict.’

According to Al Ray Palestinian Media Agency, if the text is agreed upon, it will be submitted soon to the National Assembly for approval.

However, a vote on this by the National Assembly and Senate Council does not necessarily oblige the French government, but it may have great symbolic significances, after the latest approval of British House of Commons to recognize a Palestinian state.

The French Foreign Minister, Laurent Fabius, declared in mid-October that France would recognize the State of Palestine ‘in time’ and the resolution would be useful for peace.

The draft reportedly notes the threats which put the two-state solution at risk, especially Israel’s continuing policy of illegal settlement expansion on internationally recognized Palestinian land, which undermines any possibility for a Palestinian state.

The draft stressed that the two-state solution which France and the European Union always call for, assumes recognition of a Palestinian state.

According to PA, 134 countries now recognize the State of Palestine. Sweden made the move this past October 30th.