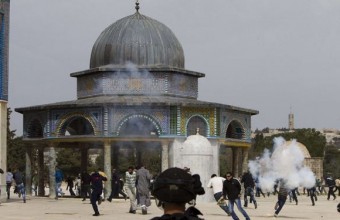 Jordanian PM Abdullah Nassour has sent Minister of Foreign Affairs Nasser Jouda to call back their ambassador in Tel Aviv, in protest of escalating Israeli aggression, the attacks on al-Aqsa mosque and successive violations in Jerusalem.The Jordanian mission, under direction of the MFA, took the required diplomatic action in presenting the complaint to the council.

Palestinian presidency spokesperson Nabil Abu Rudeineh, on Wednesday, said that Palestinian authorities decided to immediately head to the Security council, to halt the attacks on al-Aqsa.

Abu Rudeineh said, via press release, that the Israeli occupation authority systematically and deliberately continues its violations of the sanctity of the the mosque, the third holiest place and first direction for all Muslims.

Abu Rudeineh reiterated that Israel flagrantly violates all international laws, norms and legitimacy, adding that the Palestinian Authority has often warned Israel that al-Aqsa Mosque is a ‘red line’ which must not be crossed.

Still, according to the PNN, the occupation powers proceed in their extreme and daily attacks, as well as the promotion divisive policies in general — showing that Israel is not in favour of peace, nor will adhere to international law, forcing Palestinians and Arabs into a state of revolt.

Local sources say that the raid caused clashes between worshipers at al-Aqsa and Israeli forces, adding that there were injuries in the worshiper queues.