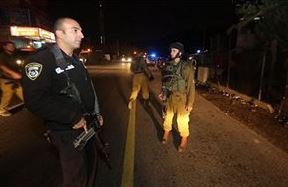 towns, south of the southern West Bank city of Hebron, and kidnapped five Palestinians, allegedly for having information that could lead to the arrest of the Palestinian driver who rammed three soldiers with his car near the al-‘Arroub refugee camp, on Tuesday evening.Dozens of Israeli soldiers invaded Beit ‘Awwa and Doura
Local sources said several Israeli military vehicles invaded Beit ‘Awwa after sealing its entrances with roadblocks, and broke into the home of Homam al-Masalma, the person believed to be behind the attack, but could not find him at home.

The Israeli Police said it managed to identify the vehicle used in the attack, using surveillance cameras installed on the Etzion Junction, and eventually identified the owner, Homam al-Masalma, 34 years of age.

Several military vehicles also invaded Yatta town, broke into and searched a number of homes, and withdrew later on without conducting any arrests.

In addition, the army said it managed on Wednesday evening to locate the car, used in the attack, abandoned near the entrance of the al-‘Arroub refugee camp, adding that the driver fled the scene.

In related news, soldiers kidnapped Dr. Ahmad Mohammad Abu Saleh, 34, near the Teqoua’ town, in the Bethlehem district, as he was driving home in Doura town. Abu Saleh also holds a Turkish citizenship.