Hit-and-Run Suspect Turns Himself In 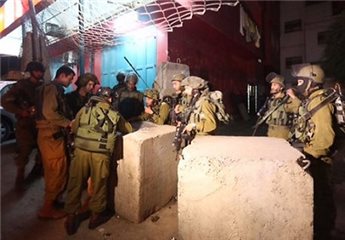 The Palestinian man suspected of having run over three Israeli soldiers, Wednesday evening, has reportedly turned himself in to security forces.Earlier, Israeli raids occurred across the southern West Bank, in an attempt to find the man, identified as one Hammam Masalma.

According to Ma’an’s reports, four of Masalma’s relatives were detained from the southern West Bank town of Beit Awwa, early Thursday, after Israeli forces raided the area and found no sign of Hammam.

Palestinian security sources said that Israeli troops erected several military checkpoints around Beit Awwa, to the west of Hebron, before ransacking the home of Mr. Masalma, who they believed deliberately attacked the soldiers.

Masalma, however, was not at home at the time of the raid and Israeli troops decided to detain relatives Muhammad Jamal Shalash Masalma, Subhi Shalash Masalma, Issa Khalil Masalma and Ismail Subhi Masalma, instead.

Israeli police sources say that they managed to identify the truck driver from the vehicle’s registration data.

Many other homes in the region were ransacked and inspected.

According to Ma’an, Wednesday’s hit-and-run incident on the main Bethlehem-Hebron road was the third such vehicular attack on Israeli soldiers and civilians in recent weeks, although the previous two took place in Jerusalem.

Palestinians, however, have reportedly decried the double standards surrounding the events, with note to the fact that Israeli settlers in the occupied West Bank regularly run over locals — including many children — but are never accused of terrorism as a result.

The case of 5-year-old Einas Khalil is only the latest in a series of Israeli settler hit-and-runs on major Palestinian roads, but the story failed to garner widespread attention in Israeli and Western media.