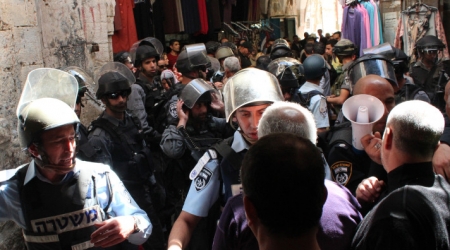 Seven Palestinians were injured, Thursday, after being targeted with rubber-coated metal bullets and teargas grenades by Israeli forces, as citizens and Birzeit University scholars headed to Ofer military camp, to protest in solidarity with Jerusalem and the rising number of dead throughout Palestine.PNN reports that hundreds of participants headed towards the Ofer checkpoint West Ramallah, where clashes sparked with Israeli soldiers. Seven injuries have been reported so far.

More photos at the PNN.

Israeli forces abducted, on Thursday, at least 26 Palestinian citizens in different raids across the West Bank, including relatives of Wednesday’s hit and run suspect, north of Hebron.

Authorities reopened the mosque the following day, after many violent clashes with Palestinian protesters, but continued their policy of barring male Muslim worshippers under 50 years old from entering the holy site.

PA President Mahmoud Abbas, for his part, warned that the closure of the Al-Aqsa Mosque was tantamount to a ‘declaration of war’ against the Palestinian people and their sacred places.

Turkish/English news outlet ‘World Bulletin’ compares the current uprising to events in September of 2000, when a visit to the site by controversial Israeli politician Ariel Sharon sparked what later became known as the Second Intifada, a popular uprising against the Israeli occupation in which thousands of Palestinians were killed.

See also: 10/26/14 Jerusalem is Burning by the Alternative Information Center