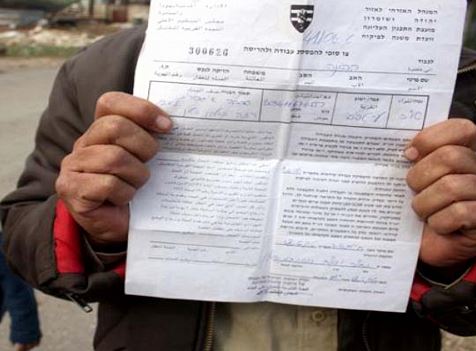 Several Israeli military vehicles, and personnel of the Civil Administration Office, run by the Israeli military in the occupied West Bank, invaded on Friday evening the village of Husan, west of Bethlehem, and handed demolition orders against seven stores.Taha Hamamra, member of the Popular Committee against the Wall and Settlements in Husan, told the Palestinian News & Info Agency (WAFA), that the soldiers handed the orders to the owners of the seven stores, located at the western entrance of Husan.

The stores are close to a settlement bypass road, leading to the Beitar Illit illegal settlement, built on Palestinian lands.

Israel recently demolished several stores in the same area, illegally confiscated Palestinian agricultural lands, and prevented the villagers from entering their lands and orchards, especially those isolated and surrounded by the settlement, and near it.