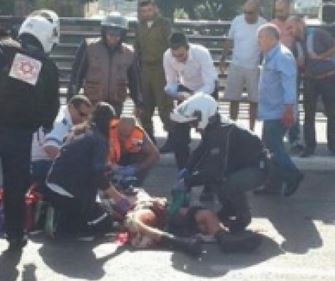 Israeli sources confirmed Monday that a 25-year-old settler woman and an Israeli soldier were killed in two separate stabbing attacks, in Tel Aviv and the West Bank, while at least two others were injured. A Palestinian man, allegedly the attacker, was shot and killed.Israeli daily Haaretz said Dalia Lamkus, 25, from the illegal settlement of Teqoua’, near Bethlehem, died on Monday evening after being stabbed by a Palestinian, while a young settler was moderately injured in his abdomen, and a 50-year-old man suffered a mild injury to the face.

The incident took place, on Monday evening, near the Alon Shvot illegal Israeli settlement, in the Gush Etzion settlement bloc.

Israeli sources said that the attacker, later identified by the Israeli Internal Security Service as Maher Hamdi al-Hashlamoun, 31, is a former political prisoner, from Hebron, who was held by Israel for more than five years.

The Palestinian News & Info Agency (WAFA) said al-Hashlamoun was shot and killed by Israeli army fire, and by rounds fired by a guard of the Alon Shvot settlement.

On Monday evening, Israeli soldiers invaded several homes in Hebron, and kidnapped the brother of al-Hashlamoun, and his brother-in-law, in Ein Sara area in the center of the city.

The soldiers also invaded and searched several homes belonging to relatives of al-Hashlamoun.

Medical sources in Hebron said dozens of residents suffered the effects of tear gas inhalation, and two were kidnapped by the soldiers, during clashes that took place in Hebron after the army invaded it.

In addition, soldiers clashed with dozens of Palestinians in Doura town, south of Hebron, and kidnapped a Palestinian identified as Hamza Ezzat Amro, 21.

The stabbing came just hours after an Israeli settler soldier, identified as Almog Shiloni, 20 years of age, from Modi’in illegal settlement (near Ramallah) was stabbed at a train station, south of Tel Aviv, and died of his wounds later on.

Israel said the attacker has been identified as Noureddeen Abu Hashiyya, from Askar refugee camp, in the northern West Bank district of Nablus, and that he entered Israel without a permit.

Following the two incidents, Israeli Prime Minister Benjamin Netanyahu held a meeting with his senior security officials at his home in occupied Jerusalem, and ordered a series of measures “to combat the increasing violence.”

He instructed the officials to increase the number of Israeli soldiers on the ground, and to demolish the homes of Palestinians responsible for attacks against Israel.

The latest development came amidst increasing tension and clashes in different parts of the country, mainly in occupied East Jerusalem, following escalated settlers attacks and invasions into the yards of the Al-Aqsa Mosque in Jerusalem.