Israeli Law to be Extended to West Bank 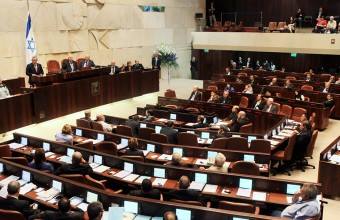 The Israeli ministerial committee approved a bill, on Sunday, to extend laws regulated by the Israeli Knesset into the occupied West Bank.According to the PNN, Israeli sources said that the bill needs to be submitted to the Israeli parliament of the Knesset, for voting, and must pass three readings before becoming law.

Israeli settlers living in the occupied West Bank are, as of now, formally subject to military rule.

The area’s 350,000 settlers, however, are effectively under the jurisdiction of Israeli civilian courts because parliament has already applied a clutch of laws to them, primarily criminal, tax and military conscription.

The new draft bill would make it mandatory for the commander to issue, within a month and a half of a law’s passage in parliament, an identically-phrased military order, effectively ensuring that all ratified legislation also applies to settlers.

Furthermore, according to the new bill, Israelis living in the occupied West Bank will be under Israeli law, while Palestinians living in the same areas would remain under military rule.

Director of the Jerusalem Legal Aid and Human Rights Centre, Issam Aruri, told Al Jazeera that this essentially means all Knesset permanent committees can exercise their oversight over the West Bank:

‘This means the Knesset may become responsible for certain parts of the West Bank, which may be a step towards the formal annexation of the occupied Palestinian territory without a formal announcement as such,’ he said.

Israeli PM Benjamin Netanyahu has given orders to intensify police units in Jerusalem, and to find new ways to suppress Palestinian protests and demonstrations.

He has, furthermore, given orders to demolish the houses of people who committed any actions, who were also immediately killed by Israeli police or soldiers, and that he will withdraw nationality from anyone against Israel.

PNN further reports that Palestinian chief negotiator and PLO executive Dr. Saeb Erekat said that the Knesset’s approval on regulating Israeli law in the West Bank will be taken to the International Criminal Court.

Dr. Erekat’s response to the news came during his meeting with UN peace envoy, Robert Serry, and councils of the US, England, Germany and France.

During the meeting, Erekat assured that the Palestinian Authority has decided to present the two-state solution project, which proposes a Palestinian state based on the 1967 borders, with currently occupied East Jerusalem as its capital.

Erekat pointed out that the Foreign Affairs, Negotiation Departments, Ministry of justice and other Palestinian organizations now prepare official papers for Palestinian state joining of a number of international treaties and documents, topped by the international court.

(Palestine is recognized as a High Contracting Party, according to the Fourth Geneva Convention of 1949.)

All Israeli settlements in the occupied territories, including those in East Jerusalem, have been declared illegal under international law.