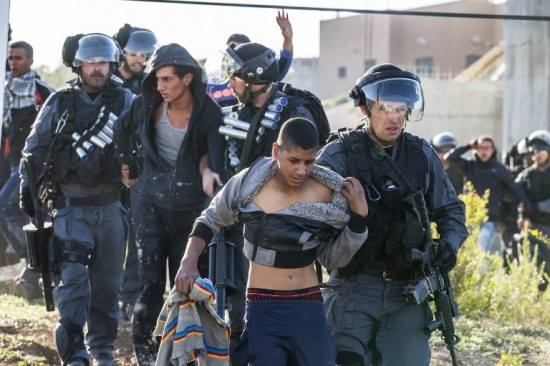 Monday, November 11: Israeli police kidnapped at least 58 Palestinians, including 10 children, in Kafr Kanna and Tur’an, in the Galilee, and in several other towns during overnight clashes, while the situation continues to deteriorate since the fatal shooting of Kheir Hamdan, age 22, late on Friday.Arabs48 news website has reported that police arrested overnight 33 Palestinians, including 10 children in Kafr Kanna village, three in Tur’an village, four from Wadi ‘Ara and Um al-Fahem, and three from Tayibe.

They were taken prisoner during clashes which took place with Israeli police after they surrounded and invaded towns involved with the general strike, in protest of the murder of Hamdan.

The District Court in Nazareth ordered the release of seven Palestinians, including three who were forced to pay fines and received a conditional release; all were taken prisoner Saturday.

The District Courts in Nazareth and Tiberius will also be looking into the cases of 27 more Palestinians, especially since the police are demanding that they be detained for further interrogation.

The Israeli police said they arrested more than 30 Arab protesters for “causing violence” and rioting in the streets of their towns.

Arabs48 said that most of the clashes took place in Kafr Kanna, the hometown of Hamdan, and that police completely sealed the village.
Dozens of local youth hurled stones at the police while they invaded their village; police sprayed them with water, firing both gas bombs and concussion grenades at them, as well.

Overnight clashes also took place in al- Fureidis village, while many local youth threw stones and Molotov cocktails at police and army vehicles after the soldiers assaulted them, amidst the firing of gas bombs and concussion grenades.

On Sunday evening, dozens of residents protested in Tayibe, while several youth chased an Israeli extremist who managed to run away, leaving his car behind before locals torched it. Police also arrested three residents, including a 15-year-old child.

In Shfa-Amr, hundreds of Palestinians protested in the center of the town, as police fired dozens of gas bombs at them.

Israeli police said, Monday, that some protesters threw Molotov cocktails at Israeli buses, in the Northern Triangle area, causing damage but no injuries.

A general strike was held Sunday in every Arab village and town.