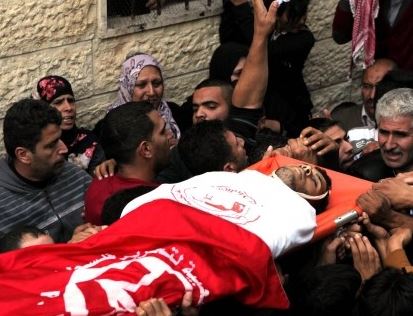 A young Palestinian was shot dead by Israeli forces during clashes in al-Aroub refugee camp north of Hebron, on Tuesday. Additionally, a Palestinian worker was shot dead, at dawn, by an unidentified person, near the Tulkarem district.Sources at al-Mezan hospital told Ma’an News Agency that 21-year-old Mohammad Imad Jawabra was shot in the chest and arrived at the hospital in critical condition. Doctors announced his death shortly afterwards.

An Israeli army spokeswoman said a ‘violent riot of 200 Palestinians’ was taking place in the area, while a Palestinian ‘aimed an improvised weapon’ at forces and that soldiers responded by shooting him, ‘confirming a hit’.

However, a witness reported to Ma’an that he and Jawabra were drinking tea on the roof of his house when the bullet struck the young man in his chest.

At dawn on Tuesday, a Palestinian worker was shot dead by unidentified person, near the Green Line opposite of the Tulkarem district, according to the PNN.

sraeli authorities told the PA that Nihad Na’alwa, age 35, from Shweika area near Tulkarim, was killed during theearly morning hours in the Zeimar area, inside the green line, when someone shot him dead. The assailant remains unidentified.

Israeli police are reportedly investigating the case, and the body will be moved to the Palestinian side of the Line following the investigation.

The Green Line separates the occupied lands of 1948 from the lands of 1967, and falls under Israeli sovereignty.

Also on Tuesday, Israeli troops shot and seriously injured a young Palestinian man near the southern West Bank town of Khursa, according to Israeli media.

Ynet news said that an Israeli military ambulance took him to an Israeli hospital.

Meanwhile, two Palestinian teens were injured during clashes in the village of Beit Furik, east of Nablus.

Red Crescent medics said that the two young men were taken to Rafeda hospital for treatment, where their wounds were described as light to moderate.

Clashes also reportedly broke out between Palestinian youth and Israeli forces in the town of Tuqu, near Bethlehem, and in Beit Ummar of northern Hebron.

The clashes come on the 10th anniversary of the death of iconic Palestinian leader Yasser Arafat, and a day after Palestinian stabbing attacks killed a soldier in Tel Aviv and a settler near Bethlehem.