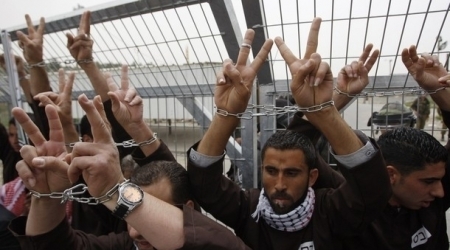 Raed transferred from solitary confinement, in Beer Sheva, to Barzillai hospital following a marked deterioration of his health.

He received his fourth renewal of administrative detonation about two months ago.

Administrative Detention is a formal method of punishment which dates back to the days of British Mandate Palestine, and in which detainees are kept indefinitely, without official charge or trial. Prisoners are often subject to living conditions which most Westerners would deem unacceptable, including medical neglect.

Local and other human rights sources have expressed concerns about Mr. Moussa’s health, demanding authorities to intervene, that they might save his life before it’s too late.

Al Ray notes that Raed had launched a hunger strike, previously, which lasted for forty-three days before suspending it last July, following promises of release by last September.

He has been detained since November 29, 2013, and was sentenced to an administrative detention which has now renewed four times.