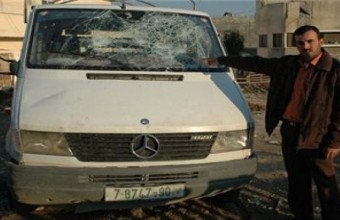 Israeli settlers destroyed the windows of some 30 Palestinian-owned cars, Monday night, in protest of the recent stabbing incident in Tel-Aviv.PNN reports that about 200 Israeli settlers participated in the demonstration, which was repressed by the Israeli military.

Following the recent violence in the region, the Israeli military intensified its units in the West Bank, while police announced a state of alert along the Green Line.

According to Walla Israeli news site, the military, by the early morning hours, spread their forces throughout the West Bank, focusing on the main roads and areas of tension. Police units also were spead across the points where Palestinian workers travel to Israel for work.

An Israeli army officer said that the West Bank has never witnessed this rate of violence, either from Palestinian attackers or Israeli extremists.