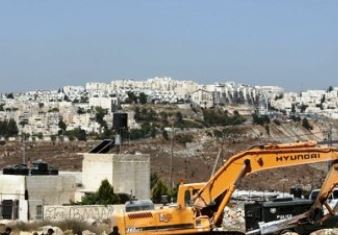 The Israeli “Planning and Construction Committee” of the Jerusalem City Council, is set to discuss the approval of 200 additional units in the Ramot Israeli settlement, in Jerusalem, during its Wednesday session.Israeli sources said the plan would then be moved to the “Regional Construction and Planning Committee” for final approval before bids are announced.

On Tuesday, November 4, the Planning and Construction Committee approved the construction of 278 units for Jewish settlers in occupied East Jerusalem. http://www.imemc.org/article/69615

It is worth mentioning that the Israeli government budget for 2015 would include an additional $15 million for the settlement division of the World Zionist Organization.

On October 23, the Israeli Cabinet allocated 130 Million Shekels (nearly $35 Million) for the settlement Division of the World Zionist Organization for what it called “developing agricultural and rural settlements,” without providing details on how the money would be divided, to cover constructions in the occupied West Bank, the Galilee and the Negev, Israeli daily Haaretz said.

The approval came just two months after the Israeli government granted the settlement division around 80 Million Shekels for “rehabilitation projects” in settlements close to the Gaza Strip.

The allocated amount will be added to the current budget of 58 million.

Settlements are illegal under International Law, and the Fourth Geneva Convention to which Israel is a signatory.