Settlers Burn A Mosque Near Ramallah 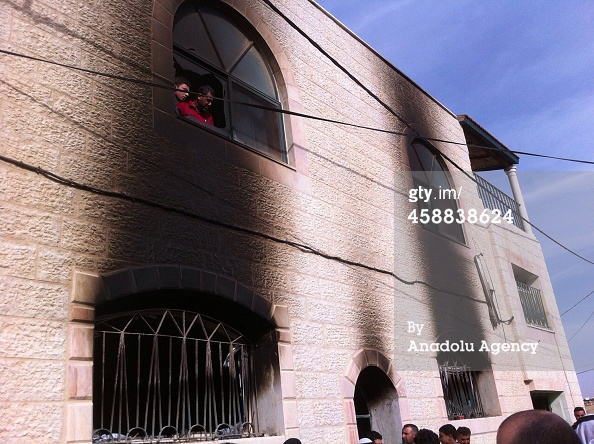 A number of fanatic Israeli settlers infiltrated, on Wednesday at dawn, into the al-Mogheer village, near the central West Bank city of Ramallah, set its mosque on fire, and wrote racist graffiti.Local worshipers went to the mosque for dawn prayers to find its ground floor in flames, and also found racist anti-Arab and anti-Islamic graffiti on its walls.

Mahmoud Habbash, Minister of Waqf and Islamic Affairs, religious affairs adviser to President Mahmoud Abbas, described the attack as another war crime, and “a state-sponsored organized terrorist attack” that violates all treaties and religions.

He added that the attack is another attempt to prevent the Muslims from praying and freely practice their religion.

Habbash further stated that Israel’ politics, and its ongoing violations against the Palestinian, their lands and holy sites, including the escalated attacks on the al-Aqsa Mosque in Jerusalem, aim at shifting the conflict into a religious one that could drag the entire region, and the world into larger conflicts and wars.

He also said Israel’s political and security leaders are responsible for the escalating violence due to their statements and actions on the ground, and the failure to hold the settlers accountable for their crimes.

Faraj Na’san, head of the al-Mogheer village council said the settlers repeatedly vandalized cars and buildings in the village, and partially burnt its second mosque nearly two years ago.