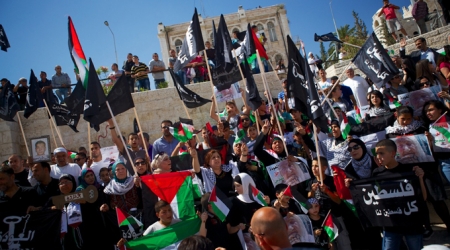 An Israeli border policeman has been arrested in connection with the killings of two Palestinian teenagers, during a Nakba day protest on May 15, according to Israeli police.A spokesman told Ma’an News Agency, via telephone, that no other information was available regarding the arrest except that it was related to the Nakba day killings of 15-year-old Muhammad Abu al-Thahir and 17-year-old Nadim Nowarah in Beituniya.

Israeli forces had initially insisted that live fire was not used, but an autopsy team eventually confirmed that the wounds which killed the two teens were from live bullets.

The teens were shot and killed during a protest rally marking the 66th anniversary of the Nakba, or ‘Catastrophe’, when more than 760,000 Palestinians — estimated today to number over 5 million, with their descendants — fled or were driven from their homes in 1948.

The killings were caught on camera, and CCTV footage showed that the two teens were not participating in clashes when they were shot, and posed no threat to Israeli forces.

The incident drew little more than token criticism by Western officials, and sparked a number of volatile protests across the West Bank. It is one of the milestone events leading up to this past summer’s conflict in Gaza, as well as the current crisis in Jerusalem.