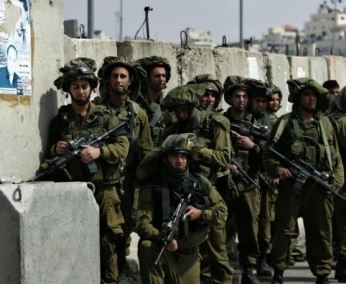 The Israeli army continued its daily invasions and arrests in different parts of occupied East Jerusalem, and kidnapped ten Palestinians. Clashes reported in the al-‘Isawiyya town; many Palestinians, including schoolchildren injured.Local sources said the army have been conducting daily arrests in the town, following repeated clashes between the soldiers and local youths.

On Thursday morning, local residents, social and political leaders held a protest, and blocked the eastern entrance of the al-‘Isawiyya to protest the army closure of the main entrance of the town with concrete blocks.

Member of the al-‘Isawiyya Follow-up Committee, Mohammad Abu al-Hummus, said the residents were protesting the closure of the road as it limits their freedom of movement.

He added that dozens of students, teachers and workers participated in the protest, demanding the removal of roadblocks and concrete blocks so that they can move freely to reach work, schools and even hospitals without delays.

The soldiers used excessive force against the protestors, fired gas bombs and concussion grenades at them, while police dogs mauled a number of protesters. Dozens suffered the effects of tear gas inhalation, and several others suffered cuts and bruises.

Abu al-Hummus said the army blocked the main entrance of the town three times over the past two months, adding that the army blockaded the eastern entrance nine days ago, while its southern entrance has been closed for three months.

He said thousands of residents, especially students and workers continue to suffer due to the blockaded road, and have to walk for large distances to enter or leave their village.

The soldiers are constantly present at the eastern entrance of al-‘Isawiyya, and continuously search cars and interrogate the residents.

Abu al-Hummus said all schools have been suspended in the al-Isawiyya, while many schoolchildren suffered the effects of teargas inhalation.

The Israeli police also ticketed dozens of drivers at random, and without justification; the tickets range between 250 New Israeli Shekels, and 500.

The Israeli Police said it arrested 188 Palestinians in Jerusalem since October 22, for “participating in protests and clashes with the army and the Police.” Among the kidnapped are 71 children.