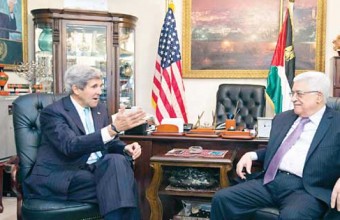 VOA reported, today, that U.S. Secretary of State John Kerry was scheduled to meet with PA President Mahmoud Abbas in Jordan, Thursday.State Department spokeswoman Jen Psaki said, according to the PNN, the talks were likely to focus on how to lower tensions with Israeli occupation, particularly the recent flare-up in the dispute over al-Aqsa mosque in occupied East Jerusalem.

Also up for discussion are the current efforts to rebuild the Gaza Strip, where Israeli airstrikes flattened entire neighborhoods during a 50-day war that left more than 2,100 Palestinians dead and some 11,000 injured.

The meeting comes just a day after Israel announced a new phase of planned illegal settlement construction in a Palestinian section of East Jerusalem, and Bethlehem, in the West Bank.

Psaki said, Wednesday, that the U.S. is ‘deeply concerned’ about Israel’s settlement construction plans, which ‘fly in the face’ of the stated goal of achieving a two-state solution.