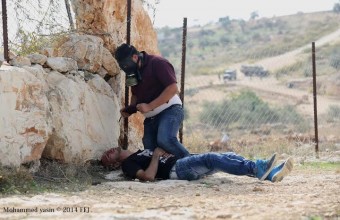 Palestinian photographer Haitham al Khateeb was injured by a tear gas canister in his leg, Friday, while dozens of participants suffered from teargas inhalation at the Bil’in weekly demonstration, near Ramallah, in the occupied West Bank.The Palestinian News Network reports that the demonstration was launched with a slogan of resistance against the closure of al-Aqsa Mosque (the first one since 1967), as well as the increase of Israeli segregative policy, the apartheid wall, and its overall violent stance against the people of Jerusalem.

Locals said Israeli forces were there before the beginning of the non-violent march, waiting for the participants and throwing not far from a hundred teargas canisters, to be followed by sound grenades and rubber-coated bullets, in their attempt to stop the march.

Dozens of soldiers and jeeps reportedly waited, always a little closer to the village, to prevent participants from reaching the area closest to the wall. The soldiers then attacked the demonstrators and chased them in jeeps to arrest them.

A French delegation visiting the village of Bil’in, with Mayor Onglavil Mr. Jean Doris participated in the march, as an expression of solidarity with the Palestinian People and Bil’in village.

More photos at the PNN.