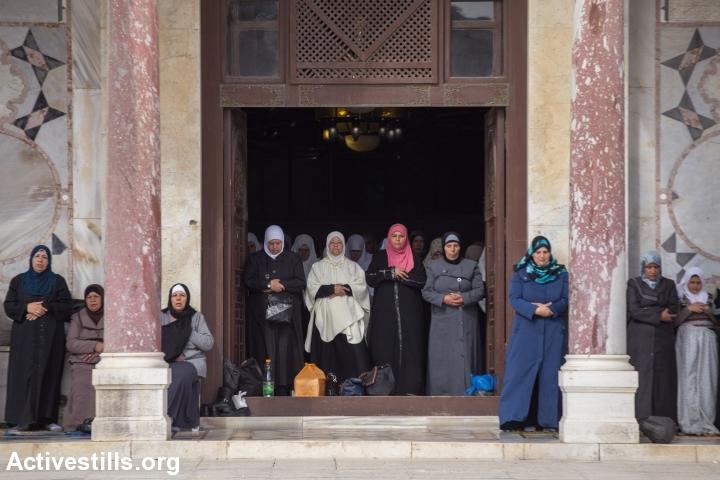 Israeli forces allegedly ‘eased restrictions’ on Palestinian worshippers attending the weekly prayer service Friday at the Al Aqsa Mosque, but dozens of women were refused entry, and were forced to perform their midday prayers in the alleyways near the mosque.Following Friday’s prayers, the mosque was closed again by the Israeli soldiers who surround it, and a group of Israeli settlers were allowed to storm the mosque on Saturday.

The women were turned away from the Israeli military checkpoints that surround the mosque because they refused to surrender their Israeli-issued ID cards to the soldiers. According to the women, their past experiences with Israeli soldiers confiscating their ID cards have involved Israeli soldiers refusing to return them, or forcing them to wait days or weeks to get them back.

Since all Palestinians are required to carry their Israeli-issued ID cards at all times, the confiscation of these IDs essentially immobilizes them, and they are unable to travel – even to a nearby village or to the Israeli military base where it is being held – because of multiple Israeli checkpoints along the way.

In addition, Israeli forces frequently subject the women to harsh interrogations at police stations before they will allow them to have the ID cards back.

During the first Palestinian intifada (uprising) in the late 1980s and early 1990s, the Palestinian non-violent resistance organized actions in which they threw their Israeli-issued ID cards into a pile and refused to accept their legitimacy. This action was not widely publicized at the time, and those who participated in the action were punished, and the town (Beit Sahour) was put under 40 days of closure in which all businesses were closed and people were prevented from leaving their homes.

In the most recent Israeli assault on the al-Aqsa mosque, Israeli troops have closed the mosque for the past several weeks, and have allowed only right-wing extremist settlers to enter – many of them with the stated intent of destroying the mosque to construct a Jewish temple in its place.

The al-Aqsa mosque is considered the third-holiest site in Islam, and its repeated closure by Israeli troops has led to numerous protests by Palestinian residents of the city of Jerusalem, where the mosque is located, as well as surrounding towns and villages. These protests have been violently repressed by Israeli forces, including both lethal and semi-lethal weapons – resulting in numerous injuries and the death of 14-year old Palestinian-American Orwa Hammad at one of the protests.