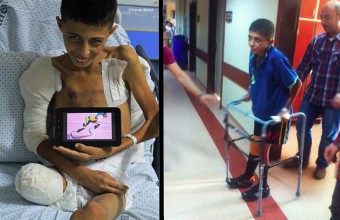 14-year-old Mohammed Siyam, from the Gaza Strip, lost his leg in an Israeli bombardment during the latest Israeli military aggression on Gaza, this past July.According to the PNN, after the boy lost 12 members of his family, and both of his legs, he was moved to Jerusalem to receive treatment there.

He was later moved to Turkey, where he was given artificial legs and found a state of improved health.

On Tuesday, Mohammed was pronounced dead during a needed operation on his lungs and respiratory tract.

This summer’s assault on Gaza killed some 2,200 Palestinians, most of whom were civilians and at least 500 of them children. Some reports give higher figures.

Over 11,000 Palestinians were injured. Some neighborhoods were completely flattened, and about 30,000 houses were demolished.