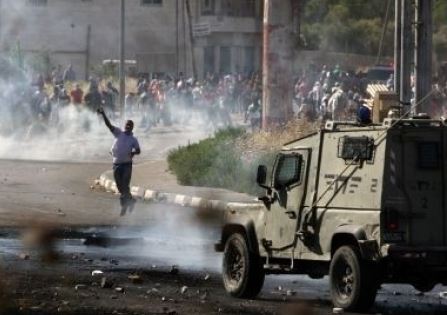 Palestinian medical sources have reported that dozens of children have been injured during clashes with Israeli soldiers, near the Shu’fat refugee camp, and ‘Anata town, northeast of occupied East Jerusalem.Local sources said dozens of soldiers and undercover units of the Israeli military, tried to invade the Shu’fat refugee camp, but were met by dozens of Palestinian protesters who hurled stones and empty bottles at them, forcing them to retreat to the entrance of the camp.

The soldiers fired gas bombs and rubber-coated metal bullets at the protesters, and into a local school; more than 35 children, between the ages of 7-12, suffered the effects of tear gas inhalation.

In addition, a Palestinian teen was shot by a rubber-coated metal bullet in his leg, and another in his thigh, and received treatment by local medics as their conditions did not require hospitalization.

The school then phoned the families, asking them to come and pick up their children to avoid further injuries.

Clashes also took place near the Anata roadblock, while the soldiers also stopped and searched dozens of cars, and fired rounds of live ammunition, gas bombs and concussion grenades hitting an electricity pole causing power blackout in the area.

In addition, a number of youths hurled stones and a Molotov cocktail at an Israeli settler’s car near the Hezma roadblock, north of Jerusalem, causing no damage or injuries according to Israeli sources.

The settler fired rounds of live ammunition, and fled the scene.