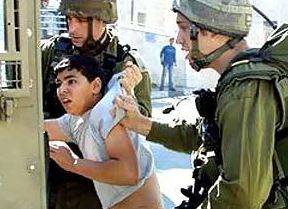 Palestinian human rights groups have reported that a detained Palestinian child from Jerusalem was seriously injured during interrogation at an Israeli interrogation center in Salah Ed-Deen Street, in the occupied city.The WAFA News Agency said the child, Khader al-‘Ajlouni, 16 years of age, was pushed down a flight of stairs at the police station, and suffered serious injuries to his neck, arms and back.

It added that the child was transferred to a hospital in the city after becoming unable to move one of his arms and one of his legs.

Also in Jerusalem, small groups of Israeli extremists invaded the yards of the Al-Aqsa Mosque through the al-Magharba Gate, under heavy Israeli military presence.

Late on Tuesday at night, Israeli soldiers invaded a number of homes in the occupied city, and kidnapped several children, before taking them to an interrogation facility.