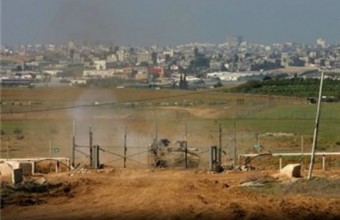 Israeli military media and military reported gunshots fired near Erez crossing, between Israel and the northern Gaza Strip. on Wednesday.Channel 7 said gunshots were fired towards Israeli forces at the crossing, without causing any injuries. An Israeli army spokesperson told Ma’an News Agency that ‘fire was opened’ at Israeli forces near the separation barrier.

Forces reportedly responded by using a ‘harmless’ smoke screen and then left the area.

According to the PNN, Israeli artillery fired about 30 smoke missiles on farms and fields of Gazan citizens near Beit Hanoun city.

Local sources said that the shooting targeted farms and fields owned by Palestinians, on the borders of Beit Hanoun city, in the northern Gaza Strip, and that occupation military towers opened live fire on the farms, with reconnaissance planes and heliocopters hovering above the city.

Israeli sources claim that the shooting came after a number of soldiers and workers, constructing the buffer-wall in West Beit Hanoun, were exposed to fire.