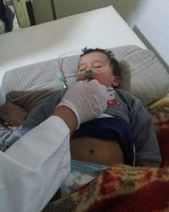 Palestinian medical sources have reported that an infant, three months of age, suffered the effects of tear gas inhalation, after dozens of soldiers invaded Beit Leqia village, west of the central West Bank city of Ramallah, and fired gas bombs at a number of homes.The sources said the infant, Hanan Dar Mousa, was moved to a local hospital in Ramallah, suffering a moderate injury.

The invasion led to clashes between the soldiers and dozens of local youths, who hurled stones at them.

The Police said the attack took place in King George Street, and that the four assailants have been apprehended while carrying the tear gas cans, and were moved to an interrogation center.

The four settlers are from the Yitzhar Israeli settlement, illegally built on Palestinian lands near the northern West Bank city of Nablus.

In related news, two Palestinians have been shot and injured By Israeli Army Fire in Deir al-Hatab village, east of the northern West Bank city of Nablus.

Eyewitnesses said several military vehicles invaded the village, and that clashes took place between the invading soldiers and local youths.