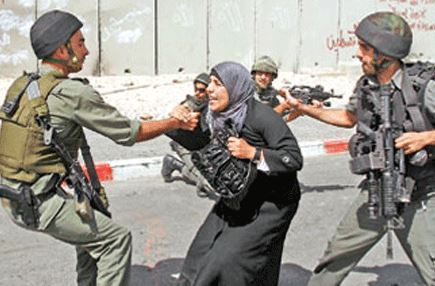 Israeli soldiers kidnapped, on Sunday evening, a young Palestinian woman at a military roadblock, near the Shu’fat refugee camp, in occupied East Jerusalem.The kidnapped woman has been as Shorouq Ayman Rateb Abu Teir, 21, years of age.

The Israeli army claimed the woman was kidnapped “after attempting to stab a soldier with a sharp object,” but did not provide any further information about the allegation.

On Sunday at night, dozens of Israeli extremists marched in various roads and alleys of the Old City of occupied East Jerusalem, carrying Israeli flags, and posters of the “temple” while chanting racist slogans such as “death to Arabs,’ and slogans calling for expelling the Palestinians.

The fanatics were demanding the Israeli army and police to open all gates leading to the Al-Aqsa Mosque to that they can continue to invade it.

During the provocative procession, the police closed various roads and alleys to allow them to march, while keeping the Palestinians from entering the area, and in many cases, preventing them from leaving their homes.