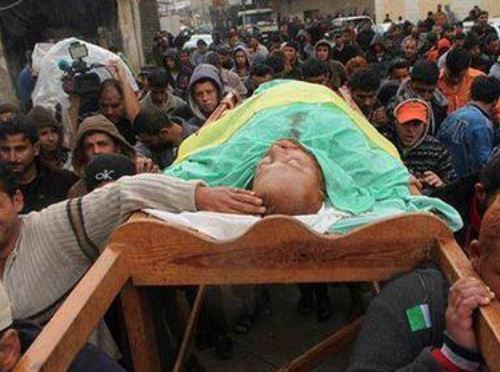 Palestinian medical sources have reported that a man was shot and killed by Israeli army fire, east of Jabalia, in the northern part of the Gaza Strip on Sunday. In addition, a Palestinian teen was shot and wounded by army fire in Rafah, southern Gaza.Dr. Ashraf Al-Qedra, spokesperson of the Ministry of Health in Gaza, said the slain Palestinian is a famer who was working in his land close to the border fence.

He added that the 32-year-old Palestinian, identified as Fadel Mohammad Halawa, was shot in his back, and that the bullet exited through his abdomen. His body was moved to the Kamal ‘Adwan Hospital in Jabalia.

Eyewitnesses said that Israeli soldiers stationed on a military tower across the border fence, east of Jabalia, shot and killed Halawa, and targeted other Palestinians in the area. They said Halawa was hunting birds when the soldiers shot and killed him.

The Israeli military alleged that the soldiers fired “warning shots” at Palestinians who “approached the border fence”, adding that Palestinians did not heed the command and the army fired again, “wounding one in the legs”.

The army said that it is investigating the Palestinian claim that a man was killed in the shooting.

Halawa is the first Palestinian in Gaza to be killed by the Israeli army since the ceasefire agreement was reached three months ago, ending 50 days of intense violence and devestation in the region which saw over 2,000 people killed, most of whom were Gaza civilians.

In related news, a Palestinian teen, 17 years of age, was shot and injured by Israeli army fire in Rafah, in the southern part of the Gaza Strip.

The wounded teenager was moved to the Yousef an-Najjar Hospital, suffering a serious injury.