Livni ‘Prepared to be Fired’ over Opposition to Jewish State Bill 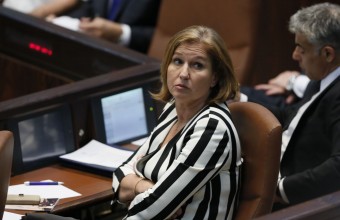 The Israeli cabinet, on Wednesday, is set to vote on and approve the controversial ‘Jewish Nation’ legislation proposed by Prime Minister Netanyahu, which was opposed by 7 ministers and approved by 15.The Palestinian News Network (PNN) reports that Minister of Justice Tzipi Livni strongly opposed the bill, saying it was controversial to the principles of democracy.

Livni, along with Finance Minister Ya’ir Lapid, from the Yesh Atid party, asserted that the move is a deliberate measure, by Netanyahu, in resolving the coalition and jockeying for position ahead of possible early elections.

‘The bill submitted today puts the Jewish state before democracy,’ Lapid declared during a recent speech at Tel Aviv University. ‘Neither I, nor the Yesh Atid party, will vote for the law.’

By Netanyahu’s calculation, the Jewish state will have ‘national rights’ such as the flag, anthem, and the right to immigrate, for Jews alone.

According to the PNN, about 50% of people living in Israel are secular and this statistic is part of the reasoning behind the support of another recent bill authorizing rabbis to convert people to Judaism, in addition to facilitating ease of foreign entry into Israel via immigration.

Science Minister Yaakov Peri, also of the Yesh Atid party, said that the bill reminded him of countries which took on Shariah law as a political standard.