Fateh Official Kidnapped By The Army In Jerusalem 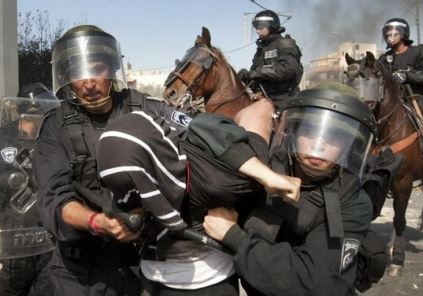 Israeli soldiers kidnapped, on Tuesday at dawn, the secretary of the Fateh movement of President Mahmoud Abbas, in occupied East Jerusalem, from his home in Silwan town, south of the Al-Aqsa Mosque. The soldiers also kidnapped his brother.Local sources said the soldiers broke into the home of Fateh official ‘Adnan Gheith, and his brother, Sadeq, violently searched their properties, and kidnapped them. The soldiers also confiscated Adnan’s mobile phone.

In addition, the soldiers broke into, searched and ransacked several homes in different neighborhoods in occupied East Jerusalem, and its Old City, and handed two women and a young man military orders for interrogation.

Local sources said dozens of soldiers invaded Aqabat as-Saraya area, in the Old City, and handed a woman, from al-Hashlamoun family, a warrant for interrogation at the Al-Qeshla Police station, in the Hebron Gate area.

She has four imprisoned brothers; three of them had multiple court hearings, including on Monday, and her fourth brother was taken prisoner a while ago.

Also on Tuesday at dawn, soldiers invaded a home in the al-‘Ezariyya town, southeast of Jerusalem, and handed resident Mousa Jaber, an interrogation order for his 16-year-old son, Ragheb.

The son was ordered to head to an interrogation center in Maale Adumin settlement.