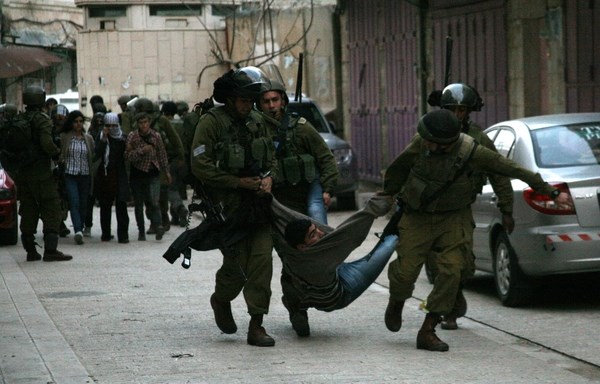 Israeli soldiers kidnapped, on Tuesday morning, a Palestinian at the entrance of the al-‘Arroub refugee camp, north of Hebron city, in the southern part of the occupied West Bank.Local sources said the soldiers stopped resident Dia’ Kamel Abu Hash-Hash, at the main entrance of the camp, and interrogated him before cuffing and blindfolding him, and to him to an unknown destination.

In related news, soldiers stationed at the Container Roadblock, blocking the northern entrance of the Shuhada Street in Hebron city, stopped dozens of students, teachers and many residents, and only allowed the teachers, students and residents with special needs to cross, while the rest were forced back.

Soldiers also invaded several neighborhoods in Hebron city, and installed a roadblock at the entrance of Sa’ir town, before stopping dozens of cars and searched them while inspecting the ID cards of the passengers.