Gaza Left Out of its Own Reconstruction 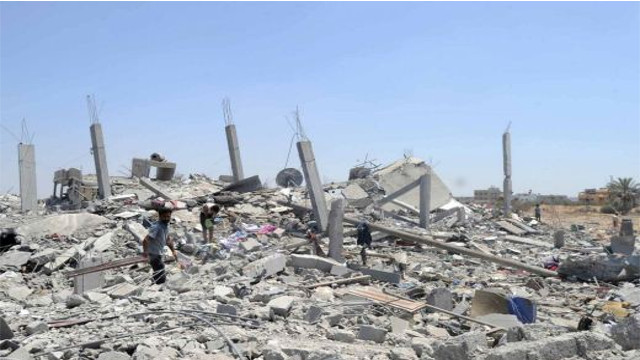 The Gaza reconstruction plan is hostage to Israeli security demands, and was drawn up without participation of Gaza’s population or Hamas. International donors talk about “accountability” and “local ownership”, yet are doing exactly the opposite. Elizabeth Austwick explores.Over six weeks on from the Cairo donor conference in which donors pledged $5.4 million to facilitate reconstruction of the Gaza Strip following Operation Protective Edge, and there are few signs of progress.

The reconstruction plan was finalised in early November by the United Nations (UN), Israel and Palestinian Authority (PA), all of whom created a system to supervise the entry of construction materials into Gaza based on Israel’s security demands. It prescribes that all candidates applying for reconstruction material must specify exactly how their homes was damaged, what material is needed and how it will be used. Israel will then have the possibility to examine and deny candidates. This gives Israel the ability not only to decide who deserves the ability to reconstruct their homes and lives, but also the time scale in which this work will be conducted.

This bases the reconstruction process on Israel’s security demands whilst excluding basic human needs in Gaza. Ayah Bashir, an advocacy assistant in Gaza and member of the Palestinian Campaign for the Academic and Cultural Boycott of Israel (PACBI) steering committee, states that “there is a huge debate and even refusal from civil society actors of the plan for reconstruction and arguments that the UN is actually setting the ground for Israel to continue its siege of Gaza.” Hamas outwardly opposed the UN plans to reconstruct Gaza.

Whilst the PA, Israel and the UN co-ordinated this reconstruction plan, they ignored both the needs and voices of the local community, excluding local actors from the decision making process. The UN has continuously side-lined Hamas in reconstruction talks because as Hamas leader Abu Marzouk cites, “It is not an acceptable member for many international parties, including the Americans and the Israeli entity’. Further to this, neither Hamas nor local groups were invited to Cairo donor conference in October. The exclusion of Hamas and local organisations from the conference undermines one of the aims of the conference, to “strengthen the Palestinian government’s ability to rehabilitate that Gaza Strip”; Hamas as the de-facto government in Gaza must be included in this process.