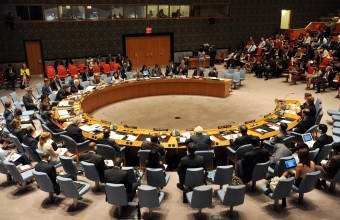 An overwhelming majority of the United Nations General Assembly voted in favor, Wednesday, on 5 draft resolutions in favor of Palestine. President Abbas says that he is ready to set up a Palestinian state on 22 percent of historical Palestine, and has called on the international community for support.The UN decision comes after the Assembly discussed two articles: ‘The Palestinian Cause’ and ‘The Conditions in the Middle East’.

The resolutions are as follows, the PNN reports:

1. The resolution titled ‘Using Amicable Methods to Resolve the Palestinian Cause’; the voting results were: 148 in favor to 6 against, with 8 abstentions.

2. The resolution regarding ‘Jerusalem’, with 144 votes in favor to 6 against, with 10 abstentions.

3. The resolution titled ‘The Informational Program about the Palestinian Cause’, which is being handled by the administration of media affairs for the Secretary-General of the United Nations, with 147 votes in favor to 7 against, with 9 abstentions.

4. The resolution titled ‘Committee for Palestinians’ Right to Exercise Ownership of Their Inalienable Rights’; the voting results were: 94 in favor to 7 against, with 56 abstentions.

5. The resolution titled ‘The Section of Palestinians Rights’, with 91 votes in favor to 7 against, with 59 abstentions.

After the voting process, Permanent Observer of Palestine to the United Nations, Riyad Mansour, gave a speech expressing his gratitude and thanks to the member countries of the UN, for their initial stand, and their votes in favor of resolutions which show their support to the Palestinian cause.

Mansour stated that the community represented by the United Nations’ protection of international law is a source of comfort and support to the Palestinian people which will help them in their continuing journey of resistance and striving to maintain their inalienable rights, and bringing an end to the Israeli occupation, which will liberate the State of Palestine and its capitol, Jerusalem, and fulfill the two-state solution.

The ambassador also affirmed the importance of the approved resolutions, saying that what affects the credibility of the United Nations is not, as some claim, the adoption of these resolutions but the non-existence of a necessary political will to force Israel to show respect to these resolutions and apply it.

President Abbas says that he is ready to set up a Palestinian state on 22 percent of historical Palestine, and called on the international community to compel Israel to meet the terms of its legal obligations regarding international resolutions.

Anadolu Agency reports that the official statement included the PA’s readiness to resolve the conflict with Israel in accordance with international resolutions and establish a Palestinian state on only 22 per cent of historical Palestine, with East Jerusalem as its capital.

Furthermore, it was mentioned that, as part of his resolution, a just solution for Palestinian refugees should be found in accordance with the UN resolutions.

‘The State of Palestine had, through the Arab Group, presented a draft resolution to the Security Council to set a timeframe for ending the Israeli occupation,’ he added.

‘The State of Palestine continued to act with utmost responsibility to serve its people and uphold its legal obligations and international commitments. It had stood ready for decades to reach a solution to the conflict, and despite diminishing hopes and a dangerous situation on the ground; it remained committed to the two-state solution.’

Abbas calls for ending all Judaisation measures in occupied East Jerusalem, as well as actions aiming to change the Christian and Islamic Palestinian identity of the holy city, and to refrain from attempts at dividing al-Aqsa Mosque.

The meeting was held in context of the International Day, observed annually on November 29 to mark the date in 1947, when the General Assembly adopted a resolution partitioning Palestine into two states, PNN further reports.

Many Palestinians strongly oppose Abbas´ statement regarding a possible Palestinian state on 22 percent of the land, as it recognizes Israel as a state and gives up Historical Palestine and excludes the Right of Return.

However, Foreign Minister Riad Malki announced, on Monday, that the PA has decided to delay its statehood bid at the United Nations Security Council, which was supposed to take place at the end of this month.

The decision to delay thebid came after pressure and threats by US, along with lack of back-up from the council members.