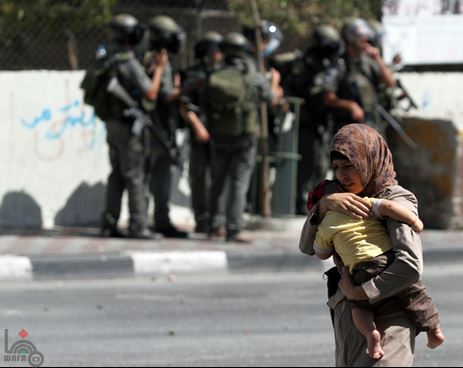 The three have been identified as Majd Mohammad Manasra, 18, Karim ‘Atef ‘Assaf, 19, and Ibrahim ‘Atiyya Manasra, 17.

Soldiers also invaded the al-Fawwar refugee camp, south of the southern West Bank city of Hebron, and kidnapped three Palestinians after breaking into their homes and ransacking them.

The three have been identified as Rajeh Abu ‘Ajamiyya, 42, ‘Ala Mustafa al-Ballass, 23, and Wisam Fayez Abdullah, 21.

Abdullah was kidnapped after the soldiers invaded his family home, searching for his brother who was there at the time of the invasion, and the soldiers kidnapped him instead.

Also in Hebron, soldiers installed a roadblock near the Beit Hagai settlement, stopped and searched dozens of Palestinian cars and searched them while interrogating the residents, and inspecting their ID cards.

In occupied Jerusalem, soldiers kidnapped four Palestinians, including a young woman who was assaulted by the soldiers.

Three of the kidnapped Palestinians have been identified as Anas Dabash and Mahdi ‘Attoun from Sur Baher, and Amani Maghrebi from the at-Tour town.

The latest violations are part of daily invasions, arrests and assaults carried out by the army against the Palestinians and their property in different parts of the occupied West Bank, including occupied East Jerusalem.