Egypt Reopens Rafah Crossing for 1st Time in a Month 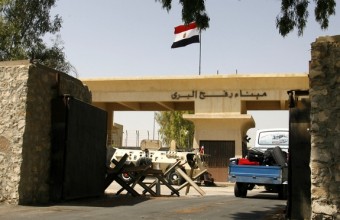 Egyptian authorities will open the Rafah border crossing with the Gaza Strip to allow thousands of Palestinians, stranded for weeks on the Egyptian side, to return home, an official stated on Wednesday. Additionally, Gaza’s Ministry of Agriculture has imposed a ban on the import of Israeli fruit.Nathmi Muhanna, director of Palestinian crossings and borders, told Ma’an News Agency that Rafah would be open on Wednesday from 4:00 p.m. to 7:00 p.m. and on Thursday from 7:00 a.m. to 4:00 p.m.

The Palestinian ambassador to Egypt, Jamal al-Shubki, confirmed that he had received word from Egyptian leadership that the crossing would indeed be opened.

The crossing was closed in late October following an attack on Egyptian soldiers in the Sinai desert, resulting in the deaths of 30 soldiers.

PNN further reports that the crossing is the only non-Israeli access point to the Palestinian territory, and that terminal was operating in only one direction – allowing people in but not out.

Rafah crossing is the principal connection between Gaza’s 1.7 million people and the outside world, but Egypt tends to keep it closed, as part of the jointly-enforced Israeli blockade on the region.

The closure of the crossing has prevented thousands of Gazans from accessing medical treatment or higher education in Egypt and beyond, the United Nations Office for the Coordination of Humanitarian Affairs said in its latest report.

In related news, Gaza’s Ministry of Agriculture announced, on Wednesday, that it will stop importing Israeli fruit into the besieged enclave after Israeli authorities prevented vegetables from Gaza from entering the West Bank, at Kerm Shalom crossing.

The ban caused Palestinian farmers huge financial losses and will lead to a decrease in prices of vegetables in Gaza, the Ministry said at the time.

‘We decided to stop importing fruits from the Israeli side to pressure Israel to resume allowing our vegetables to be exported,’ Tahsin Wal-Saqqa, general manager of marketing and crossings in the Ministry, told Ma’an.

In early November, Israel allowed the export of agricultural products from Gaza to the West Bank for the first time since 2007.

Before the siege was imposed on Gaza following the Palestinian political division of 2007, Gaza exported fruits, vegetables, flowers, fish, and products to the West Bank.

Israel agreed to ease the siege on Gaza as part of the recent ceasefire agreement that ended a devastating Israeli military offensive on Gaza, this past summer but, so far, no integral steps have been taken to lessen restrictions.