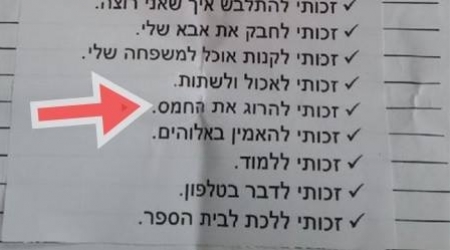 Teachers at an Israeli school recently delivered a worksheet to their students which includes, in a list of rights, the right of ‘Killing Hamas’.This surprised some students’ parents enough to cause them to make a formal complaint against the school, Al Ray Palestinian Media Agency reports.

According to Channel 10 Hebrew News, students of Tel Aviv’s ‘Blokh’ school were shocked to see the bizarre inclusion on a 2nd grade worksheet.

Parents were quoted to say that ‘instead of protecting the students, the school throws them in politics beanball’, noting that such curriculum was not appropriate for 2nd graders.

The Israeli Ministry of Education responded as saying that this point is an initiative of one of the pupils but stated. however, that the right does not fit in with the laws of ‘democratic’ countries.