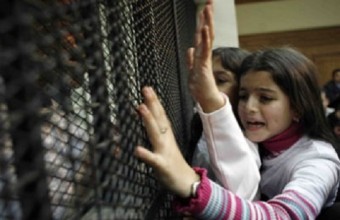 11-month-old Balqis Ghawadra became the youngest prisoner in the world, after visiting her father in Eshel Israeli prison, occupied Beer Sheva.Nihal Ghannam Ghawadra from Bir Al-Basha village, near Jenin, waited passionately for the permission to visit her husband, Mu’ammar, only to be separated from her two little children, and to see her entire family become prisoners, Ahrar Center for Prisoners Studies and Human Rights reports.

According to the PNN, Nihal headed to the prison on Wednesday, with her daughter Balqis, 11 months, and son Baraa’, age 2. As soon as she arrived, the three were separated.

Nihal was imprisoned, along with her two children, under the pretext of sneaking a mobile phone to her husband. The entire family has now been imprisoned, as a result.

Muammar’s mother told Ahrar that her daughter in law called to inform her that Israeli authorities had imprisoned her and her children, and began calling on people to help release them from the prison.

Director of the center Fu’ad al-Khuffash declared the move by prison officials a flagrant violation of human rights and a crime against humanity, calling on local and international human rights organizations, as well as Palestinian authorities, for a speedy intervention.

Mu’ammar Ghawadra was released in 2011, under the Gilad Shalit prisoner exchange between Israel and Palestinian resistance, after serving 8 years of a life sentence (+ 20 years) in Israeli prisons.

Muammar was imprisoned again, a few months ago, without charge.

Furthermore, according to Director al-Khuffash, 63 of the Palestinian prisoners released in the Shalit agreement were also re-imprisoned without charge, for the purpose of using them as hostages, in order to damage resistance in any future prisoner exchange agreement.