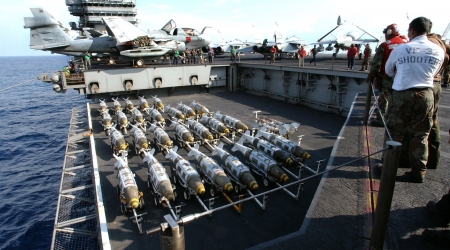 The United States Department of Defense has announced that it will supply the Israeli air force with 3,000 smart bombs (precision-guided munitions designed to achieve greater accuracy).The funding for the sale will come from US military aid to Israel, and will be paid until the end of November, 2016. The United States provides Israel with some $8.5 million in military aid each day, while it gives Palestinians $0.

See: U.S. Military Aid and the Israel/Palestine Conflict, at If Americans Knew, for details.

Palestine has no official armed wing outside of PA security coordination with Israel, with any militarized response to aggression from occupation forces left in the hands of ill-equipped political brigades and other homegrown resistance groups. The infamous rockets reported to be fired from Gaza are, by default, little more than hollow tubes stuffed with dynamite and typically fall into unpopulated areas of the Negev Desert.

Al Ray reports that, according to media sources, the cost of the recent deal is estimated at $82 million, through which the Israeli air force will receive three thousand G-DAM model bombs.

Israel drew heavy criticism after a one-ton smart bomb meant for a senior Palestinian militant also killed 15 civilians in an attack in the Gaza Strip in July of 2002.

These bombs can hit its targets precisely, by routers. Israel used these bombs on a large scale against several targets in the last Israeli aggression against the Gaza Strip. However, the majority of over 2,000 ‘casualties’ reported from Gaza, this past summer, were civilian in nature.

See: Names of Palestinians (and Israelis) Killed in the War on Gaza since 8 July

Israeli military officials would not say whether the bombs might be intended for use against Iran, but ruled out the possibility that they could be used against Palestinian targets.