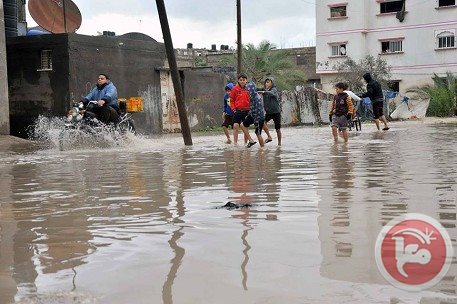 UN Palestinian refugee agency UNRWA declared, on Thursday, a state of emergency in Gaza City, due to massive rains and flooding.Ma’an News Agency reports that a major storm, over the past week, has filled the streets of Gaza City with water and sewage, causing further misery for more than 100,000 Palestinians who remain homeless as a result of Israel’s crippling military assault on the region, this past summer.

In a public statement, UNRWA informed that 63 schools across Gaza City and 43 schools across the Northern Gaza Strip had been closed Thursday, as a result of the flooding. Hundreds of residents in the Sheikh Radwan neighborhood have also been evacuated.

‘The flooding is exacerbating the already dire humanitarian situation in Gaza caused by blockade and the unprecedented destruction from the latest Israeli offensive,’ the agency posted on Facebook.

Ma’an further reports that Gaza is prone to severe flooding and that, in early December, 2013, heavy rains led to the displacement of at least 40,000 people. Any flooding is exacerbated by a chronic lack of fuel which limits how much water can be pumped out of flood-stricken areas.

The fuel shortages are a result of the eight-year-old Israeli siege, which also limits the import of related machinery that could help Gazans to combat the floods.

In response, UNRWA has additionally declared 60,000 liters of emergency fuel to be provided to pumping stations in Gaza.

Furthermore, head of the Coordination Committee for entry of goods in the Gaza Strip, Raed Fattouh, stated that Israeli authorities have allowed the entry of 300 trucks into the region, via Karam Abu Salem crossing, on Thursday.

According to a report by Al Ray Palestinian Media Agency, the trucks are loaded with goods for the commercial, agricultural, aid and transportation sectors.

Mr. Fattouh also noted that 100 trucks of gravel will enter for the infrastructure of roads for the Qatari projects. In addition to a quantity of industrial diesel for Gaza’s only power plant, transportation fuel and cooking gas will also be pumped through the terminal.

Karam Abu Salem is the only commercial crossing through which goods and fuel can enter the Gaza Strip, and Israeli authorities close it on Friday and Saturday of each week.

Thursday marks the fourth straight day of unusually heavy rains across the region, causing temperatures to drop across Palestine.

The occupied West Bank is also experiencing flooding as a result of the storm, with difficult driving conditions reported in the hillier villages and cities.

Rains are expected to end by Friday morning, with temperatures to rise, as well.