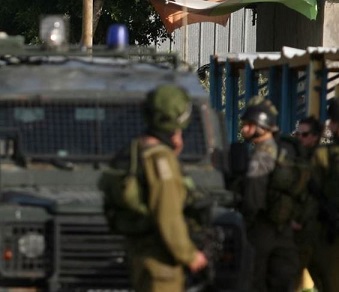 Israeli soldiers kidnapped, on Thursday at dawn, fifteen Palestinians in different parts of the occupied West Bank, and in occupied East Jerusalem, and took them to a number of interrogation and detention centers. Settlers attack a Palestinian near Jenin.The Palestinian News & Info Agency (WAFA) stated that dozens of soldiers invaded different neighborhoods in Hebron city, in the southern part of the occupied West Bank, and Beit Ummar nearby town, and kidnapped eight Palestinians.

The soldiers also handed resident Jihad Nasser Ekhlayyil, 20, a military warrant for interrogation in the Etzion Military base, south of Bethlehem.

In addition, soldiers invaded a bakery in the ‘Asseeda area in Hebron, and detained the workers for several hours. The soldiers also fired gas bombs at a number of homes in the area.

In occupied Jerusalem, soldiers invaded the al-‘Isawiyya town, and the Shu’fat refugee camp, in the center of the city, and kidnapped four Palestinians.

Also in Jerusalem, soldiers invaded and ransacked a number of homes in the Old City, and nearby neighborhoods, and interrogated several Palestinians.

Soldiers also invaded handed ‘Adel Issa Hijazi, 42, from Bethlehem, a warrant for interrogation in the Etzion military base. Hijazi was trying to cross the Za’tara Israeli military roadblock, south of the northern west Bank city of Nablus.

On Wednesday evening, a number of extremist Israeli settlers attacked a Palestinian in Qalqilia, near the northern West Bank city of Jenin.