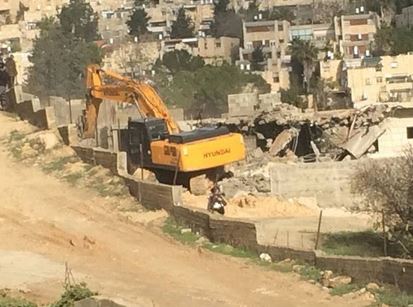 Israeli soldiers demolished, on Monday morning, a Palestinian home in the al-‘Isawiyya town, in occupied East Jerusalem. The soldiers declared the town a closed military zone.The Wadi Hilweh Information Center in Silwan has reported that home, 200 square/meters, was still under construction, and that the owner, Ishaq Mustafa Hamdan, started building it after Israel first demolished his property two years ago.

The center said Hamdan lived in his home along with his eight family members, adding that Israel continued to impose high fines.

Hamdan is currently imprisoned by Israel since his arrest more than two months ago, as he could not pay the high fines imposed on him.

The Jerusalem City Council claims the property was built in a “Green Area,’ where constructions are not allowed although he owns the land where his home stood.

The Israeli invasion, and the destruction of the home, led to clashes between the soldiers and dozens of local youths.

The army also attacked many Palestinians who gathered near the home before the army demolished it, and the soldiers fired rubber-coated metal bullets at them, wounding a young man in his abdomen.

Soldiers also assaulted a number of women while removing them from the area.

The invasion was carried out during early morning hours after the soldiers surrounded it, and declared it a closed military zone.

On Monday at noon, soldiers kidnapped Tha’er Salman Abu Sbeih, 21, after storming his home in the al-Wad area, in the Old City of occupied East Jerusalem.

On Sunday at night, clashes took place after dozens of soldiers invaded al-‘Isawiyya and fired dozens of gas bombs; many residents suffered the effects of tear gas inhalation.