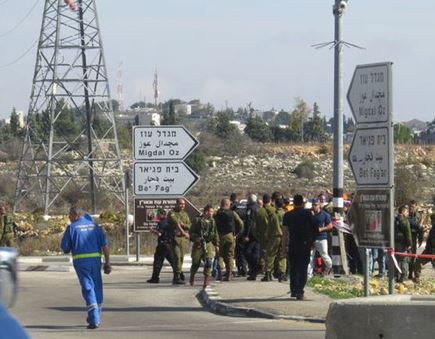 Israeli sources have reported, Monday, that a young Palestinian woman was shot and seriously wounded, at the Etzion settlement junction, south of the West Bank city of Bethlehem, allegedly after she stabbed a Israeli settler, causing a mild injury.The young Palestinian woman has been identified as Amal Fakhri Taqatqa, 22 years of age, from Beit Fajjar town, near Bethlehem. Taqatqa is a former political prisoner.

The Palestinian woman was shot by at least four live rounds to different parts of her body, and was moved to the Hadassah Israeli Hospital, in occupied Jerusalem, suffering life-threatening wounds.

Eyewitnesses said the soldiers prevented Palestinian ambulances and medics from entering the area.

Israeli sources said the settler, 19 years of age, suffered a minor cut, and received treatment by Israeli medics at the scene, as his condition did not require hospitalization.

In related news, soldiers kidnapped a young Palestinian man, from the northern West Bank city of Nablus, allegedly after searching him and finding a concealed knife.

Local sources said the young man, 18 years of age, was trying to cross the Tapoah military roadblock. He was moved to an Israeli security center for interrogation.