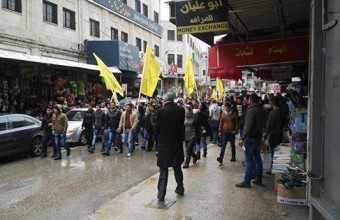 Citizens of Jenin, on Wednesday, participated in the funeral of 21-year-old Noor Salim, who was killed after being struck by an Israeli bus near the Barta’a checkpoint, while two other young Palestinians were severely injured.Eyewitnesses and security sources said that an Israeli Eged bus, carrying Israeli settlers from Mabodatan settlement, ran over three Palestinian youngsters this past Tuesday, November 25th.

PNN reports that, following the incident, Israeli forces closed the checkpoint and declared the area a military zone, Noor was moved to a hospital inside the 1948 borders, and pronounced dead of his wounds.

The others, aged 23 and 27 years, were moved to Jenin hospital by Red Hilal ambulances, in critical condition.

A few weeks ago, Palestinian driver working for the Eged company for transportation and father of two children, Yousef Rammouni, was found hanged in his own bus at the end of his shift.

It was later found that Rammouni was attacked by Israeli settlers, beaten then killed with cold blood.